Perhaps the fact that the phone remained unanswered and was redirected to the switchboard should have been a warning. But with a Saturday morning breakfast rush, it’s possible that no-one could take the call. Having left my details, I was assured that I’d receive a call back within the hour.

That hour passed without luck. Perhaps that should have been the final warning. Unperturbed, I called The Square again, only to this time have the call answered immediately, and have a table for four confirmed. A non-smoking table at 7pm awaited, with the promise of culinary and service excellence, as expounded upon on the website.

On arrival, the faintly sketched mental images the web had created soon evaporated. Don’t trust the Internet. Ever.

We were seated at the busiest node in the restaurant – where front-desk, kitchen, prep station and cold corridor air collide. All other tables had been reserved, according to the uncertain wait-staff. Only incredulity and escalation of the question resulted in any effort being made.

This gave us time to examine the menus. For there were three – the traditional menu, a specials board, and the wine list. Each was in worse shape than the other. The specials board – a leatherette-cardboard-cover combination showed signs of frustrated or indecisive diners having decided to rather chew along its edges. Perhaps they, too, were not seated comfortably. And thus, frayed nerves translated into frayed menu edges. In an attempt at what I presume was intended to be witty humour, one staff member who was confronted with this replied that it was “vintage”, even going as far as saying that some “would page high amounts” for it. 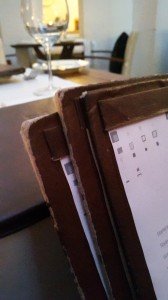 “Some would pay large amounts for this”

This reminds me of a resort that branded itself as “rustic 5-star” – a venue that had indeed received its 5 étoiles but was so dilapidated and run down that both the water and the prawns were well past their sell-by dates. But I digress.

Clearly, neither attention to detail, nor humour, were the strong point of the restaurant – the traditional menu almost provided a per-dish sample on each page, being speckled and worn like the pricelist of a cheap hooker.

Only upon pointing out that the restaurant was ostensibly empty was another, more comfortable table found.

I opted for the 5 course wine-paired meal. I opted for it – something about paving with good intentions springs to mind.

The meal itself was average – a Saldanha Bay mussel chowder “with white wine and cream” that was not quite a chowder, a courgette and truffle barley “risotto”, a small piece of chicken supreme wrapped in Pancetta that didn’t live up to its name (but to be fair, did not seem to have much aspiration). All quite middle-of-the-road dishes, with only perhaps the crème brûlée being surprisingly pleasant. And the mussles were tasty.

The service was the downfall. Placing a non-descript glass of liquid at the head of the plate and timing intervals that make chance look like a pattern does not a wine-paring make. There’s a level of trust placed in the wait staff about what is being served as a liquid – never to see a bottle, nor have the wine mentioned when served – reduces the experience to one of being fed and watered. With any old thing available. If you’re proud to serve a pairing, serve it, don’t execute it.

The last glass of wine (described on paper to be a Simonsig Vin de Liza Noble Late Harvest 2010) never actually made it to the table. Found its way onto the bill, though. I suppose the “Late” is in the name.

Finally, this was amicably resolved with our waiter.

But surely such basics, such fundamentals, as making sure wine is *paired* not only in taste, but also in physical location for the patron to enjoy, should not need pointing out? Let alone getting wrong? Had anyone at any stage of the three hour meal bothered to follow up with the table, as traditionally a restaurant manager would, the slow kitchen, survivalist service and shoddy coordination would have been picked up?