Expire private images to protect privacy on the Internet?

A new product over at x-pire.net (which redirects to x-pire.de) was unveiled in Germany today, with the aim of embedding expiry times and information into images so that they cannot be viewed after a certain time. In that way there should be a maximum lifespan to digital images on the web to prevent future embarassment, usage etc. At this stage, the prototype is available as plug-in for Firefox (as well as some other browsers in future), and expounds the idea of a ‘forgetful internet’ so that information is not immortal on the web. 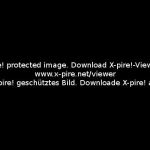 The underlying idea works on the basis of keys. An image is encoded by the image owner. The owner sets an expiry time on the image, and an image ID as well as a key are generated to go with the image. Once the image is then encoded using a generated key, the image is uploaded to a media network or social network site (Flickr, Facebook etc) – basically shared online. The key is uploaded to the key server.

The encoded meta-information contains details pertaining to expiry times of the image, viewing rights etc. The visitor to the site can use the plugin to access the x-pire key server, download the appropriate key by ID to decrypt if the image is ‘pre-expiry’ and thus view it in their browser. Decryption of the image is not possible should the expiry time be reached, and the image remains encrypted.

That’s the idea. Problem, though, is that as soon as an image is viewable in any way (which holds true for view only PDFs etc) – it can be captured and / or re-copied and thus stored in an automated fashion if someone is keen on keeping the images for perpetuity. This would require purpose and some practical logistics, but can be an issue that needs consideration. To solve this, the CAPTCHA has been added to slow down the process and add human interaction – a valid CAPTCHA reply is required before the image ID is forwarded to the key server to request the the key.

You can see the full process diagramatically as a video here (in German), and the process is given a bit more background here (in German) – ‘Google translation‘ here should not be fluent in the beautiful language.

It’s a neat idea – would be interesting to see it’s usage take-up in practice. Get the Firefox plugin here – cross-platform! 🙂