Home / Did you know / iPad vs the HP Slate

iPad vs the HP Slate 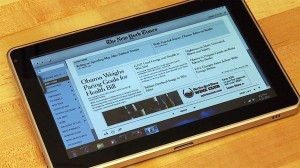 With the iPad having sold its first 300 000 units, some of which, according to Core, are being imported as grey products into South Africa as we speak, the HP Slate priced at around $550 makes its cautious appearance.

With a 1.6GHz processor, a USB port, built-in webcam, optional 3G, 5hrs runtime, and graphics playback at 1080p, it looks like quite a good contender for the — uhm – iPad user market for — uhm — people who don’t want a netbook and don’t want a keyboard, but still 0.68kg device. It’s got 1GB RAM, and runs Windows 7 Home, with the HP Touch-optimised interface layered on top – as opposed to the iPhone 3.2 OS. Full spec over here, with good write-up at Gizmodo, and promotional videos are available from HP.